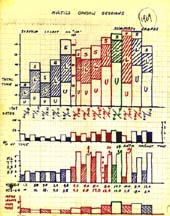 When Multics was still under development but generally able to achieve operational capability, we would bring it up on the GE-645 for general use by the development teams. These "console sessions" began in December, 1968. I had been doing some of the work in testing and became Multics's first "SysOp." Thanks to a project-wide concern with understanding what the system was doing (see the 1970 CACM paper by Saltzer and Gintell, "The Instrumentation of Multics," and my 1969 FJCC paper, "Real-time Graphic Display of Time-sharing System Operating Characteristics"), we had a lot of instrumentation and kept a fair number of statistics.

The first picture is for the period February 2-May 3, 1969 and is the first time there was enough activity for me to create the chart. The top chart shows the number of hours in the week that the system was up, coming up, or down due to a bug (hardware or software!). The second chart on the page is a simple computation of up time: typically, less than 50%. The third chart shows Mean Time Between Failures (starting out at about an hour!) and something called LTBF (Length of Time Between Failures) but I can't recall how or why I computed this. The bottom chart shows the Mean Length of User Time which I think I computed as the average length of time the average user was on the system before it crashed. 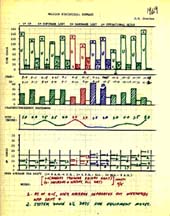 I don't know when I stopped keeping these charts, but sometime in 1971, responsibility for operating Multics as a service within MIT went to MIT's Information Processing Services department and I went along with it. Multics service was then provided regularly at MIT, first on the 645 and then on the 6180, until it was finally shut down in January, 1988.

Click on either picture to get a larger view.