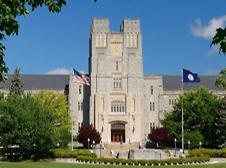 The Multics system was in the Computer Center, in Burruss Hall.

James G. Hasslacher, Jr. Paul Karagianis wrote an amazing program that everyone we talked to said couldn't be done (before Paul wrote it).

He supported Multics at Va. Tech (VPI&SU as it was known then). The most "user-friendly", interactive system, until we got Multics, was VM. The only feature of VM that Paul liked was the "disconnect". Instead of logging off, operators (users) could disconnect their terminal from the system. This suspended your activity (Usually, but not always, there were ways around it), but kept your session "alive". Your virtual memory, and all connections were left intact. Later, when you logged in from any available terminal, you were "reconnected" as if you hadn't left. It didn't matter if the terminal type changed. The only noticeable change to the user was that the clock was updated.

Paul kept asking for this feature from Honeywell. He and several other people made a Mecca up to MI. All said it could not be done.

Paul spent about 1 calendar month of off-hours to develop this program that couldn't be done. He tried to give it to Honeywell for the next Multics release. They refused it!!!! Said they had only picked up GCOS and Multics as a part of their buy-out of the GE climate control systems. As far as they were concerned, Multics was no longer being enhanced, and support would stop soon. This was not their primary business focus.

It actually took another year before the plug was pulled. Most of us hardly noticed (until they ripped the keyboards from our hands), because Paul's support (and programs) was faster, more complete, and beter tested than Honeywell's ever were.

Jim Stibbards Before Virginia Tech, I was a member of Explorer Post 692, sponsored by Honeywell in Mclean, VA, where I first coded fun projects for H316s, Level 6, and Multics.

I was a student at Virginia Tech (not a Site SA). After Virginia Tech, I went to work for Honeywell, and had work at NWGS, CISL, and then USGS. Years later I became a user of Dockmaster @ NSA. So many Multics systems, and great memories.

Primary SysAdmin during my tenure there was "Theta", aka Phil Bowden. Bruce Chestnutt (who had worked as an intern at Air Force Data Services Center - AFDSC) and I worked part-time for the Systems Programming Dept. of the VT Computing Center.

When Multics was installed, I remember getting teased a lot about (alongside the IBM System 370), they considered Multics to be "the worlds most expensive digital thermostat" - a nod to Honeywell's Controls and thermostat business.

Disc space was very limited, so I worked on a project called Migrator SysDaemon, which would migrate old/unused directories and files to tape, using tape_archive (tar). It worked reasonably well, and handled the archiving of past student work as the classes rotated through the various CS and EE classes that were using Multics.

Multics was a favorite system in the CS department... as the primary alternative at the time (1979) was to submit a punched card deck via RJE to the System 370.

I remember George Gilcrease explaining to me that when Virginia Tech "bought" the associative memory option for the cpu, he just had to wire it in... as every Multics cpu already had it installed, in the factory. :)

As I recall, many of them were HP graphics workstations, at least in the Systems Programming Dept. The primary Multics terminals were in a terminal room in the basement floor of McBride (where CS was). I know they were locally programmable in BASIC, and I suspect in APL, also. I don't recall what model HP they were. I think they were also the same HP graphics workstations, but not all had local tape drives installed. I believe they were running Current Loop at 9.6 or 19.2kbps.

I'm not aware of any BITNET comms. As far as I know, our Multics was standalone and isolated. To move data to/from Multics was usually by mag tape. I didn't have a home terminal... I don't recall ever knowing about any dial-up lines into the Multics system.

JAN Lee was my faculty advisor, and a real character. (I recall him telling a story that when he was laying on a gurney in the hospital following a heart attack, that he became very concerned about the quality and reliability of embedded computing in medical devices and such).

Dan Johnson I knew JAN Lee initially as as my professor when the CS Dept. began using Multics for undergraduate instruction, then later when I worked for the department. I also started and ran a very short-lived BSA CS Explorer Post (EP 777) for local high school students using VT's Multics that was loosely modeled after EP 692 in Northern Virginia (which used System M).

so! you want to use Multics, Virginia Tech internal document.