[Bernd Ulmann] Application areas were mainly research projects. I know that the chemistry department did research in crystallography on the machine, the mathematicians did some work on number theory (me) and numerical algorithms on the DPS 8 as well.

Education also played a role but was not the main application area.

I remember one of the professors for numerical mathematics who did quite some work on that machine: Prof. Dr. Claus Schneider, the number theorist was Prof. Dr. Gerd Hofmeister (but the programming was done by his students IIRC). The department of meteorology also did some work on the DPS 8, that was Mr. Wawers, who is already mentioned in the user list. Dr. Joachim Pense was from the mathematics department, Jörg Knappen was a physicist.

I also know that some work on the Frobenius problem in number theory was done on the Multics machine. but I don't know about any particular publications.

Here are 29 photos of the Mainz machine room, thanks to Bernd Ulmann. The Gandalf box contained computer-room modems for each FNP channel. User terminals each had a Gandalf modem. These photos were probably taken in 1991.

[Bernd Ulmann] When I started studying mathematics at the Universität Mainz the most fascinating institution was the Center for Data Processing which owned a Honeywell-Bull DPS-8 mainframe running Multics. Since I have been crazy about large computers since my first contact with a Nixdorf 8870 when I was 14, I had to gain access to this machine - no matter what I had to do for this. 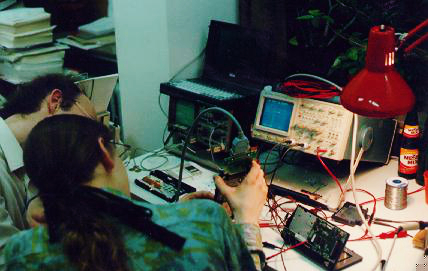 [Bernd Ulmann] My friend Ingo and I decided to subscribe to a one week course entitled "Introduction to Multics". Since the library of the center for data processing at our university sold photocopies of Multics manuals for a few DM each, we had already bought whatever we could and read through the manuals. So when the course started, it was pretty boring, since Multics was such a wonderful and user friendly system - if you ever were stuck, you had all the necessary information just at your fingertips - who needs lectures when one can practice on a new operating system? :-)

[Bernd Ulmann] As Ingo was always interested in numerical models of thermal conduction and things like that, one day he wrote a small FORTRAN program which calculated the thermal flow in a steel plate, when suddenly our course advisor had a look at his screen. Since the class was just learning how to use the ted editor, it was obvious that he was doing something totally different, which did not seem as a good idea when he was asked to leave his terminal and follow to the offices in the back of the building. After a long time - as it seemed to me, in reality only a few minutes had passed - he returned and told me that they suspected that the only reason for us to enroll to the introductory course had been to gain access to the Multics machine (which was right :-) ) and to steal computing time (which was definitely wrong).

[Bernd Ulmann] After this accident we had to figure out something new not to lose access to our newly discovered toy. :-) So we decided to ask one of my mathematics lecturers if he saw a way for us to get access to the machine in a more official way. As it turned out, he was very (!) polite and helpful and suggested to create a real "project" with only Ingo and me as participants so we could use the machine on an official basis without having to worry about bureaucratic administrators and operators.

[Bernd Ulmann] Since at this time I was constructing a processor (which eventually led to the NICE architecture), he set up two project accounts for us with the aim to support the processor development. (Thank you! After so many years, I still think quite often of "my" Multics machine and all the wonderful nights we spent at the computer center programming FORTRAN, PASCAL, PL/I, doing useful and useless, but always interesting things on this wonderful machine!)

[Bernd Ulmann] As you can guess, I really fell in love with the Mainz Multics machine. After a few months, Ingo and I asked for holiday jobs helping with the Multics introductory course (the same one we attended before :-) ) and we got our HiWi positions. As time went by we got to know more and more people of the computer center and the people working there got to know us, since we were there when they left and sometimes we were there when they came back to work the next morning. Since we spent every free minute programming on the Multics mainframe, they started to trust us more and more and eventually we were allowed to go into the machine room to have a look at "our" machine, to bring tapes in and out, to joke around with the operators and to read documentation where ever possible.

[Tom Van Vleck] In 2002, the late Theo Wawers wrote me "...My Multics experience comes from a time when I was new to things dealing with electronic machinery. Soon after my start in Fortran, I got access to the brand new multics on th HB DPS8 system in Mainz. It was simply more fun to work on Multics than on GCOS, with JCL, MVS or similar things. Soon I was the Multics expert in my institute of Meteorology in Mainz concering the programming in F77."