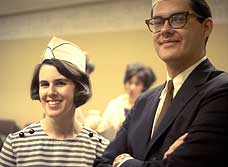 Their hats say F&T: For Food At Its Best and the banner behind them says Multics Is The One System To Have When You're Having More Than One (Noel Morris wrote the SNOBOL program that made banners.) Click for larger view.

This is a story from the 1966-67 time frame about Multics development at MIT Project MAC on the GE-645. Computer main storage was very expensive in those days, and the virtual memory design of Multics used lots of memory; so rapid paging was crucial to system performance. The design of the original GE-645 system included a paging drum, a device much faster than the disks of the day. This wasn't new: CTSS used IBM 1301 drums for swapping core images. The Multics drum, though, like everything else in the system, was to be bigger, faster, and better. GE chose a device we called the "firehose" drum. It was made by Singer Librafile, and was actually a big head-per-track disk. The disk and controller were in a box seven feet high and about 20 feet long and 3 feet wide. This was long and narrow compared to the other 645 cabinets; rumor had it that the Librafile device was also used on Polaris guided missile submarines. (The floor on the 9th floor of 545 Tech Square wasn't strong enough for the drum's weight: they had to bring in a huge I-beam to spread the load before installing it.) Most of the 645 was festooned with lights, but the drum had only a little control panel with a few cryptically labeled lights. One of the lights was labeled "LOW BOTTLE PRESSURE." It never lit up.

Never, until one day when the light came on solid yellow, and the drum wouldn't work. GE Field Engineering ran the diagnostics, which confirmed it: it didn't work. GE called for a Librafile drum specialist to fly out from San Diego.

In the meantime we couldn't boot the system. If it took 55 minutes to boot the system with the drum running, it would take five or six hours without it. Since we couldn't run our software, the "hard core" group went out to lunch at Jake Wirth's in Boston. Let's see: I was there, Jerry Clancy, Mary Thompson, Noel Morris, maybe Carole Cushing, not sure if Don Widrig and Stan Dunten went... anyway there were a bunch of us. Pretty good beer at Jake's. Everybody had two. And then we decided to have a third. I don't remember all of what happened after that, but I know we discovered the theorem "There is No Such Thing as a Three Beer Lunch." Tony Thompson joined us around 4:00 and it seems to me we all went to Mary and Tony's place in Cambridge and had dinner and stayed until midnight. We were all ready to repeat the 12 hour lunch the next day, but the specialist fixed the drum.

The drum wasn't the most reliable beast in the world. We had our share of drum head crashes, which required the expert to fly out from San Diego, open up a concealed door, erect a little plastic tent, and climb inside it to replace platters and re-stack the drum. Inside his little portable clean room, he usually worked for a couple of days to fix it. These specialists were sometimes unreliable too: one went off shift and didn't turn up the next day: turned out he'd had a heart attack and was in the hospital. Another had to be bailed out of jail after being nailed for drunk driving.

At least two of these drum crashes prevented us from working toward the critical Phase One milestone. Now, the Bell Laboratories team in Murray Hill, New Jersey, had a 645 also, with a working drum. Of course, it wasn't much use to them yet, since Multics didn't boot, but they used the 645 in 635 mode under GECOS, and they were developing the compilers on it. There were times when parts were swapped between the 645s to keep one running, but the drum wasn't something you'd ship casually. So the Phase One team flew down to Murray Hill to do some test runs. In those days one could catch the early Newark shuttle from Logan airport (grabbing a cup of orange juice before climbing the plane's stairs and paying the flight attendant after takeoff) and get to Murray Hill by ten or so.

The Bell Labs people had accounts on the Project MAC CTSS machine, just like the rest of the developers. They could log in to CTSS over long distance phones and write EPL programs and compile them, just as conveniently as we could in Cambridge. They could also run the MRGEDT command to create a GE batch tape, and by using a special name for the tape, signal operations that the tape should be sent to Murray Hill with a device called the IBM 7711, which was two tape drives linked by a phone line. The Murray Hill copy was input to GECOS on their 645, running the 645 simulator; when the job ended, the Murray Hill operator took the output tape, with its core dump, and transmitted it back to Cambridge for input to CTSS, so that the BTL users could use CTSS debugging tools.