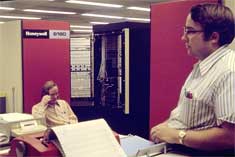 We can learn from the problems we had building Multics as well as the successes. Here is one such story from the early 70s.

Multics boots up by initializing the supervisor and then patching the OS tables to make it appear that one process is running. This process, the initializer process, calls out to ring 4 and runs the answering service, the code that listens to idle terminals for logins.

In the 60s, the initializer process also listened for operator commands. Operator communication and log messages came out on the initializer terminal. The other daemon processes such as backup were logged in manually by the operators at system startup time, each one on its own terminal. We had a row of TTY37s in the machine room with signs on them saying which process was which. Small sites didn't want to have one terminal per daemon; some daemons never said much, and terminals were expensive and operationally clumsy. Big sites found that the output speed of the initializer and daemon terminals could be a bottleneck, and wanted to filter and redistribute output.

I learned two useful lessons. First, worry about performance. I hadn't even thought about the possibility of this failure mode. Second, test under realistic load.