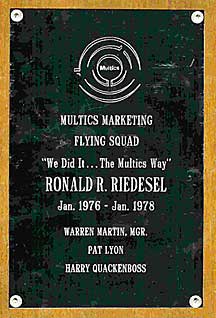 Here are some scans of other Multics Marketing coverage during the 1970s.

Writeup (83K PDF) in the Honeywell Printout of an award for best technical presentation at the ACM Greater New York regional conference on databases given to Harry Quackenboss. Harry and Oris Friesen prepared the presentation about the just-announced MRDS. There's one picture of Warren Martin with Harry and one of Oris. The issue is dated 31 August 197_ (last digit of the date is cut off).