Found these in a scrapbook my wife was threatening to donate to the waste disposal firm.

These are issues of the Honeywell User News, given to users by Honeywell Marketing. The first one, dated August 1978, has an article on the first European Multics sale to the Avon Universities Computing Centre of the Universities of Bristol and Bath. (See the Louisiana State Trooper Story.) It also contains an article on Honeywell executive promotions, and has pictures of Dick Douglas and Norm Feldman, two of the executives we had to justify Multics to.

The date is cut off on the second issue. It shows the Avon machine being installed, so it's probably from 1979. The main article describes the Multics sale to the University of Calgary. 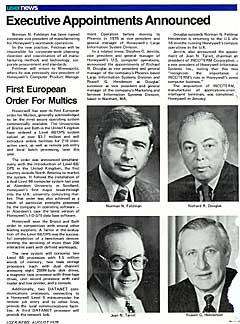 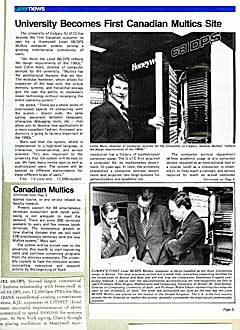